People who are opposed to hunting, have clearly never been hunting (with the exception of those few who felled a deer on their first try and have had survivor’s guilt since). Besides the obvious, which is hunting for the sake of food or sport, it is, to me, a ritual; part meditation, part prayer, part skill, and part attunement. 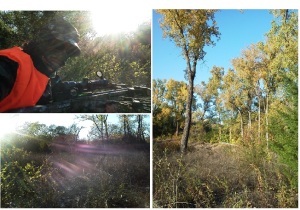 Tonight, for example, I got home from work and then set about preparation for my hunt. I first had to shower to wash away the bacteria and smells of the day, then I meticulously got dressed in clothes especially chosen and prepared for the evening, and when I had everything I needed I headed off into nature. Once at my hunting spot, after leaving an “offering” of sweet corn and freshly cut apples for the deer to graze upon at their leisure, I set up my camo fishing stool (now a hunting stool) and sat silently. I listened and observed G-d’s creation all around me; a grasshopper flitting from plant to plant until it finally stopped and watched me awhile, a red-headed woodpecker who flew from tree to tree singing and pecking for food; a raccoon who slipped out of the forest to sip water from the pond; a bullfrog who sang to the crappie as they leapt for their insect dinner; crickets that chirped in unison; and birds that sang from every tree. For an hour and a half I sat silently attuned to the abundance of life and thriving and blessing around me.

Of the 28.5 hours I have spent hunting since I first started one month ago, most of my time has been spent in awe of my little corner of G-d’s world. Sometime about 6:30 PM, however, I saw two deer step out of the forest and into the clearing. They were both female, and I empowered my patience on this evening and remained still and silent. In fact, the larger doe of the two spied me, but because I remained absolutely motionless, and lightened my breathing, she did not know what to make of me, so, after some time, went about her business. It was then that I set her in my sights, took aim, and for the first time in my life, squeezed the trigger with the intent of tagging my first deer.

I’ve been told by those with far more experience than I have, that shooting a live target is far different from shooting a stationary one. The truth hadn’t resonated with me until I took the shot. When I target practice with my Parker Challenger crossbow at Godfreys Indoor Range, I hit every target pretty much where I’ve aimed. And given I’m busy yacking away in my own head, I never noticed the release sound the crossbow makes as it shoots the arrow at the target. Tonight, however, in the stillness of the dusk, the arrow leaving the crossbow made the loudest “thwack” I have ever heard; possibly that the doe had ever heard also, because the second the arrow was released toward the target, the doe responded with an about-face, running into the forest. Her companion ran in the other direction, but they met up somewhere with the bigger doe screaming non-stop!

At that point, I was uncertain if I had hit my target or not. I wasn’t sure if her screaming was a very long warning to her herd, or if I’d been successful. My adrenaline was pumping so heavily I could hardly control my index finger to text my friend John about the incident. His favorite part of my text was my quote, “My adrenaline is off the f’ing (expletive spelled out) chain!” John came out to search with me for a blood trail or my arrow. It turns out we found my arrow where I had swiftly tagged the berm. But that was okay, because after 52 years and finally 28.5 hours of hunting, I let my arrow fly. Hitting the mark would have been ideal, but it was another lesson in life, offered by the hunt; we will not hit every goal we aspire for and aim at. As my parents taught me when I was just a child, “If at first you don’t succeed; try, try again (how far we have fallen as a society from that pithy truth).

(This essay was originally published October 17, 2014 on Facebook by Sara Crusade – GalHunterMidlife)