Today was the last day to hunt deer during extended rifle season for my unit here in Kansas. I gave it the old college try; morning and afternoon on January 1st, morning hunting on the 2nd, and morning hunting today. I returned to the upper area blind this morning, having seen deer in the area mid-morning on my game camera. Alas, none showed up for me today; but I was prepared, on the off-chance no deer showed up (hint of facetiousness in that off-chance comment), I brought my Mossberg .22 rifle with me for squirrel hunting.

Yesterday afternoon I laid down some corn near the feeder, primarily in hopes it would lure a doe, but also knowing that the squirrels in the upper area have gotten fat from eating the deer corn I’ve placed in the feeder since late Spring. True to their hungry little natures, they found their way to the deer corn this morning, along with blue jays and an assortment of other fine feathered critters.

My Mossberg does not have a scope on it. When I’ve shot it at the range I’ve always done well using just the front and rear sights, so surmised I’d be just as accurate targeting squirrels. After 2.5 hours of idle sitting in the blind waiting for a deer opportunity, I decided it was time to rest the Browning and set the Mossberg upon my bipod. Carefully I took aim and squeezed the trigger. The squirrel in my sights remained sitting as if still eating corn while the other squirrels and all the birds took off for cover. So I took a second shot.

The squirrel turned and began to run away, but clearly in a manner that indicated she’d been hit. I endeavored to follow after her, but she lost me, and my initial efforts to find her were unsuccessful as there was no blood trail. My heart sank and I felt really sad, and guilty, thinking that I’d injured a creature. In my mind I imagined that I’d perhaps just shot her foot. The squirrel’s ability to run and hide left me sure I’d only wounded her.

I packed up my belongings and walked to my most recent hunting spot along the berm, hoping that maybe a doe would engage in late morning movement. My plan was to remain no longer than 45 minutes, as I’d already been out for three hours and wanted to get back home to take my dog outside. The area remained calm, so at 1230 I left, making every effort to make peace with the knowledge I would have no more deer hunting for nine months. After unloading my Browning rifle in my truck, I decided to return to the upper hunting area and do another search for the squirrel. Ethical hunting is something I strongly believe in, and I did not want to be someone who shot a squirrel and then walked away.

On my second search, I went a bit farther into the woods and took a slightly different path. Low and behold I found a small blood trail at the base of a tree. It was hard for me to believe that the squirrel somehow managed to climb up the tree, but I didn’t see any blood trail leading away from it. Something caught my eye to my right; a dinner plate-sized piece of wood with some red on it. When I moved over closer to investigate, I saw the squirrel under a fallen tree. My shot had been fatal, which I thought was a good thing, in lieu of my earlier opinion that I’d only wounded the squirrel.

Back at my truck, I field dressed and processed the squirrel, managing to keep the hide intact (which I now have drying for preservation). Tonight’s dinner consisted of baked squirrel, which I placed partially covered with unsalted chicken broth, and accompanied with sweet onion, pear, parsley and bok choy. The recipe I’d found online called for celery but the store was out. Bok choy has a similar consistency to celery but added a much stronger flavor that I probably wouldn’t add again. I also seasoned the squirrel with fresh ground garlic, ground pepper, and some sage. Salt is not an option as I’m making the switch to a Paleo lifestyle. I’ve been told that squirrel meat is tough and needs to be slow cooked, or deep fried. I found it fairly moist and acceptably chewy being baked for 45 minutes with the broth to keep it basted.

Although somewhat gamy tasting, the cooked squirrel made my apartment smell wonderful, and I enjoyed ingesting the fruits of my labor. Only hunters and fishermen can claim to harvest a critter during the day, prepare it, cook it, and eat it that evening.

Unable to harvest a second deer and fulfill that goal, I did manage to fulfill my goal of harvesting and preparing a squirrel. And I was able to maintain my code of ethical hunting, while also providing myself a protein source considered lean, healthy, and appropriate for the Paleo Diet.

Deer hunting may be over, but there are plenty of other critters appropriate for a healthy, home-cooked meal. 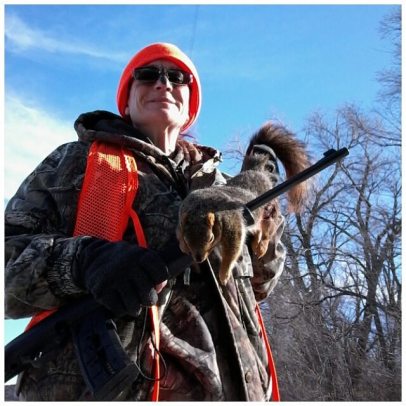 One thought on “First-ever Squirrel Hunt”