There was a time, many moons ago, when I used to genuinely celebrate Earth Day as a holiday (of sorts). Living in California, and being in graduate school studying holistic and transpersonal psychology, it was almost mandatory to buy-in. Each year I would take my young son, toddler through kindergarten, to the Concord Pavilion where the Earth Day celebration would be held and we’d peruse the displays about evil chicken farmers, admire furniture made of reclaimed wood, and engage in face painting. That was our Northern California urban tradition.

These days (these years) I barely even remember that April 22 is Earth Day; because as a hunter and fisher, I daily pay homage to the Earth and the myriad blessings G-d has bestowed upon us. My fishing and hunting licenses, annoying though they may be at times, and my deer & turkey tags, and trout stamp, do more for conservation on a regular basis than a decade of Earth Day celebrations will ever do.

I tend not to be a religious person, albeit quite spiritual, and therefore am not well versed in the Bible; however I turn to the Old and New Testaments when I seek guidance, or a verse that punctuates my point. One such verse that I take to heart is: Genesis 9:3 – “Everything that lives and moves will be food for you. Just as I gave you the green plants, I now give you everything.” And with that in mind, I joyously fish and hunt to provide sustenance for myself, my family and my friends.

Today, Earth Day 2016, was no exception. Having already filled my first spring turkey tag last weekend (with my gorgeous first-ever Tom) I decided to spend at least part of this weekend fishing, before trout season ends when the Kansas weather turns sizzling and the trout cannot survive. So with today off from work, I headed out to my favorite trout pond on post, Cameron Springs, to engage in some trout fishing. As it was midday, and not a particularly good time for trout fishing, however, I also used a second fishing pole with a soft bait treble hook filled with stink bait to try my hand at catfish.

It didn’t take long before I had my first channel cat on the line; a decent sized 10-12 inch fish. I gave it the obligatory kiss on the lips for luck, placed it on my stringer, and cast out again, meanwhile continuing to tend to my trout line. My second channel cat was a fair bit larger, at about 18 inches, and I felt quite pleased at this second catfish. I continued to have minimal action with my trout line, not because they didn’t like my bait (this year, salmon eggs are all the rage with pond trout!) but because it was early afternoon and the weather had begun to warm up. So out went my catfish bait again. I genuinely enjoy channel cat, finding it an awesome accompaniment to farm fresh eggs in the morning. Another hit on my catfish line… and I reeled in the largest channel cat I have ever caught; two feet long and easily five pounds!

I moved from pleased to ecstatic when I saw the size of this fish! His head was so big that he didn’t fit on my metal stringer and I had to tether him to my rope stringer all by himself. By this time, about two hours had passed since my labbie-girl and I got to Cameron Springs and set up, so I tried one more time for a trout. I tend to be like a Retriever when I’m fishing; the slightest nibble will get me fixated and I can’t turn away. Finally, as we approached 3:30 PM, I managed to hook a trout, almost three hours after I started fishing. The trout was small, enough for one meal, but ultimately I was thankful to have gotten one at all. My yellow lab and I headed home with quite a generous bounty.

This essay will spare you the pain, primarily physical, of gutting and cleaning the catch of the day – specifically the largest catfish, whom I decided would be best without his skin. Normally I leave the skin on when I prepare my catfish, mainly because I have never learned the proper way to gut them. But this fishy was quite dirty, and being so large (all things considered) I determined his skin would hinder, rather than help, the palatability of this catch. Needless to say; it took over an hour to clean the catfish, and half of that was spent just on my “big guy.”

As far as Earth Days go, it was a fabulous day. It started out in the woods this morning, setting up a new Ameristep ground blind in a new location on my friend, John’s, property, as well as putting up a Moultrie game camera to catch the whitetailed foot traffic in the area. I spent three hours fishing; which was both productive and relaxing. And it ended with a dinner of wild turkey breast (from my Tom).

I have always known that being out in nature is a spiritual experience for me, one that calms and empowers my well-being. It was only recently, however, that I learned of a new friend’s philosophy, which makes a great hashtag; outside for a better inside. On this Earth Day, unlike those of years’ past, I didn’t just observe the commercial definition of being a good steward of the Earth; I practiced it, I lived it, I embraced it… and I ate it.

As a hunter and a fisher; I recognize that Earth Day is every day. I care for the environment in which I live, because it cares for me. And I can think of no place I’ve ever lived that more exemplifies the principles of Earth Day than Kansas; a state whose very existence is a tribute to the blessings of this Earth. 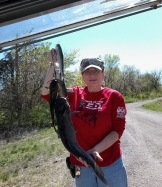 One thought on “Earth Day 2016: My Kansas Tribute”