By the time you read this, it will likely be Independence Day – tomorrow is the 4th of July. The Independence Day weekend this year is a four-day weekend, at least for those of us blessed to be Army civilians. And I’ve spent two of the four days out at the lake fishing.

In my four-plus years in Kansas, I’ve gone out fishing at Milford Lake only a handful of times; most of my fishing has been done on post, because I almost always catch fish on post and seldom catch anything out at Milford Lake. Even last weekend when my son was visiting, post-deployment, and we rented a boat for four hours; I didn’t catch a thing (although my son did catch a 15” goldeneye shad). Great memories were created though, so I decided to venture out to the lake this weekend to soak up some of the ambience.

Yesterday I spent a beautiful three hours in solitude, with just my labbie-girl and two fishing poles. My bait consisted of worms and chicken liver, and I used the set up my son and I had fished last from the boat; a worm hook and a weighted bobber. It’s ironic that my son, Dare, and I used lures galore on our boating adventure and the only thing he caught his fish with was a live worm, with a bobber. I suppose if one is fishing for something specific, than using a specific lure and fishing style is best. But nothing works like the old tried and true worm; and out at the lake, I rather enjoy the surprise of not knowing what I will harvest.

Initially I caught a sunfish, which I released and then a bluegill, which I kept. My fishing ended with a goldeneye shad about as big as my son’s. It was so peaceful and relaxing in the secluded spot I found that I decided to return again today. It was a gloriously overcast day (both days were) with light rain sprinkles on occasion, and cool breezes. I came to realize today that the air temperature was considerably cooler than the water temperature, after I waded out into the water to rescue my bobbers and hooks, which had gotten caught on the rocky lake bottom. Thank goodness for fishing slacks; the kind that unzip at the knees and become shorts, and dry very quickly.

Upon arrival, I had videographed myself with my tablet camera, and posted on Facebook how I enjoyed being alone, and felt the need to have some more quiet alone time in nature. While walking (sliding on the slippery rocks, really) back to shore from my waist level wade on my bobber rescue mission, I saw three people walking down the hill toward my spot, and heard the woman up front call out, “Is that you, Sara?”

What are the chances that someone I know would choose the very same spot to fish at the very same time I’m there…? It doesn’t seem to me that I really know all that many people here in Kansas; but I guess that’s part of the charm of living in Podunk. Given that Milford Lake covers 24.71 square miles, I can only acknowledge the inclusion of someone I know into my nature space as an intervention of a spiritual nature. Perhaps I was being a bit too “emo” even for G-d.

My first hour of fishing today had brought a sense of calm, but no fish. In no time at all, Tara (my acquaintance) and her bestie, also named Sara (maybe with a letter H), had reeled in a catfish. Tara seems to enjoy fishing; but does not enjoy eating fish, so they offered me the channel cat in lieu of releasing it. I subscribe to the Ted Nugent form of fishing; catch and eat, so I planted a big kiss on the catfish’s lips for luck, and placed it on my stringer. Luck be a lady, which Tara’s fish had been (she had a sack of eggs I found out later when I gutted her); not 30 minutes later I too caught a catfish! Both were 17” as I discovered once home.

The remainder of my time out fishing was more like a charity dinner; feeding the fish who grabbed my worms but not my hook, seasoned with intermittent conversation with my fellow fishermen… fisherpeople… fisherwomen. I’ve never been big on the sexist labeling of men and women. I just consider myself a hunter and a fisherman. When the worms were gone, my labbie-girl and I called it a day and headed home, two channel cat richer for the effort.

In the U. States we celebrate Independence Day to remember our sovereignty, hard won during the Revolutionary War with Great Britain. But I like to recognize my individual independence in the act of harvesting my own food; fish from the lakes and ponds, and mammals from the woods. To me, nothing says freedom like self-reliance sculpted with the tools of harvesting; fishing poles, crossbows and firearms. 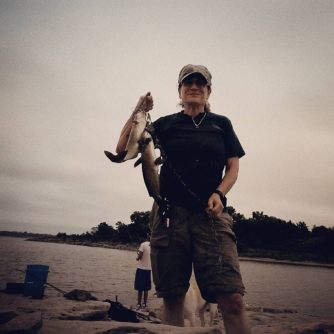